Thursday, September 3rd, 1936
Kept Drobey out (so he says) until almost twelve.  We didn’t get together until 10:30.  He says I slay the boys + asked how I do it.  I said I don’t slay him.  He said how do I know I don’t and that I do.  He also said he dreamed about me once and sighed saying “If dreams come true.”  That’s enough of that.  Teddy’s laid off.  Went to the dentist for the last time.  It was the lower right (the last tooth out.)  Went to confession.  Zosh went to the show and I washed the dishes there.  Stayed with Mrs. Gurka and we went down street and she bought us some ice cream cones.

Every time he confesses his love for her she just dismisses it!  It’s so clear, at moments, that she is interested.  She keeps it pretty damn close to the vest.

Wednesday, September 23rd, 1936
Trouble is brewing again.  Saturday Andy (the boy from PA) said he had been misunderstood by someone about the all we took one Sat. He and I and Caveman and Sophie had apologized.  Tonight Zosh said her mother had been told by Mrs. Olbrych that Caveman called Andy down and told him to take his hands off me.  Also Andy doesn’t want to go for mushrooms with Father again because Drobey might think he was trying to get in good.  What is true and what isn’t?  Zosh got her glasses but I don’t like them because they’re very thick.  Stayed with Ruth Gurka while her mother went out.  Zosh worked on my poster.

For the new readers, a reminder:  Drobey is Caveman.  She has lots of nicknames for people in these pages.  And I think she’s right.  Trouble is brewing: 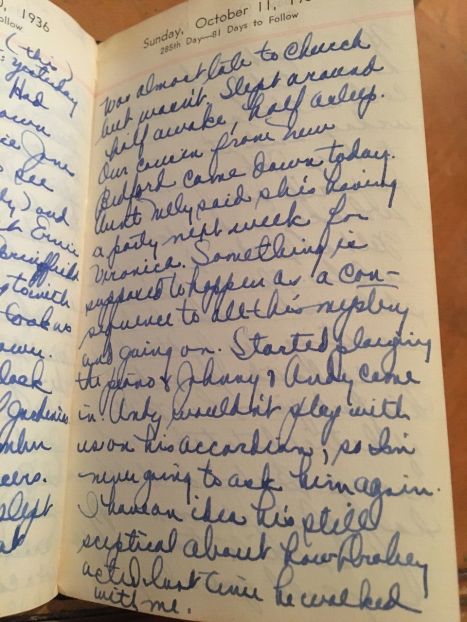 Sunday, October 11th, 1936
Was almost late to church but wasn’t.  Slept around half awake and half asleep.  Our cousin from New Bedford came down today.  Aunt Nelly said she’s having a party next week for Veronica.  Something is supposed to happen as a consequence to all this mystery and going on.  Started playing the piano and Johnny and Andy came in.  Andy wouldn’t play with us on his accordion, so I’m never going to ask him again.  I have an idea he’s still skeptical about how Drobey acted last time he walked with me.

Drobey and Andy about to be continued but can we talk about Veronica?  If you remember, she is the girl who is near death and can talk to angels and god.  We haven’t heard much from her in a while but I’ll tell you, she never has the party.  She claims it was due to her illness, but no mysteries were revealed.

Monday, October 12th, 1936
Haven’t set foot out of doors today.  Caught a cold at the shower Saturday and it’s worse today.  Johnny’s mother prepared some water and whiskey and I drank it.  Felt a little dizzy for a while,  She confirmed the statement about Drobey’s resenting the fact that Andy walked with.  He said I’m his first girl and he’s hit Andy if he tried to take me away.  But I don’t believe half of it.  Gram was up for a while tonight.  Hope my cold goes away.

Saturday, November 28th, 1936
Went dancing for the last time before advent.  Am thoroughly disgusted and don’t know why I keep going to these atrocious dances.  Such a milling of people, egotistical boys.  Surrendering women and such noise, dust.  I could go on for pages.  While waiting for Natalie to finish work at the 5 +10.  We looked over patterns in Grants’.  Drobey and Johnny and Andy came in.  Both came to say hello.  Danced with about four or five new boys.  The band was from Westfield.  On the way home we kidded with some boy in a car and I’m worried that it was someone I know.

The trouble seems to have blown over.  How could it be?  Two boys in love getting along?