Tuesday, December 10th, 1935
Oh lord please don’t let a thing like a misunderstanding come between friends, as between J. and me.  It’s horrible.  We had an election of office.  I was elected secretary.  J. Sat with Teddy and Drobey.  Drobey didn’t even talk to me.  I passed by all of them without a word.

None of this is settled yet and it’s quite heartbreaking still.

Friday, January 10th, 1936
Ernie got two invitations to the prom so far.  One from a good dancer.  He sits in our penmanship class and is one of the gayest therein.  The other is Fred Gagne.  And I thought he was glancing my way.  Nevermore will I think anything of the sort unless no one is around and even then I may be doubtful.  Went to the basketball game.  BPI won 36-21 against New Haven Jr. College.  Norma took me home.  Another rotten time at the dance. 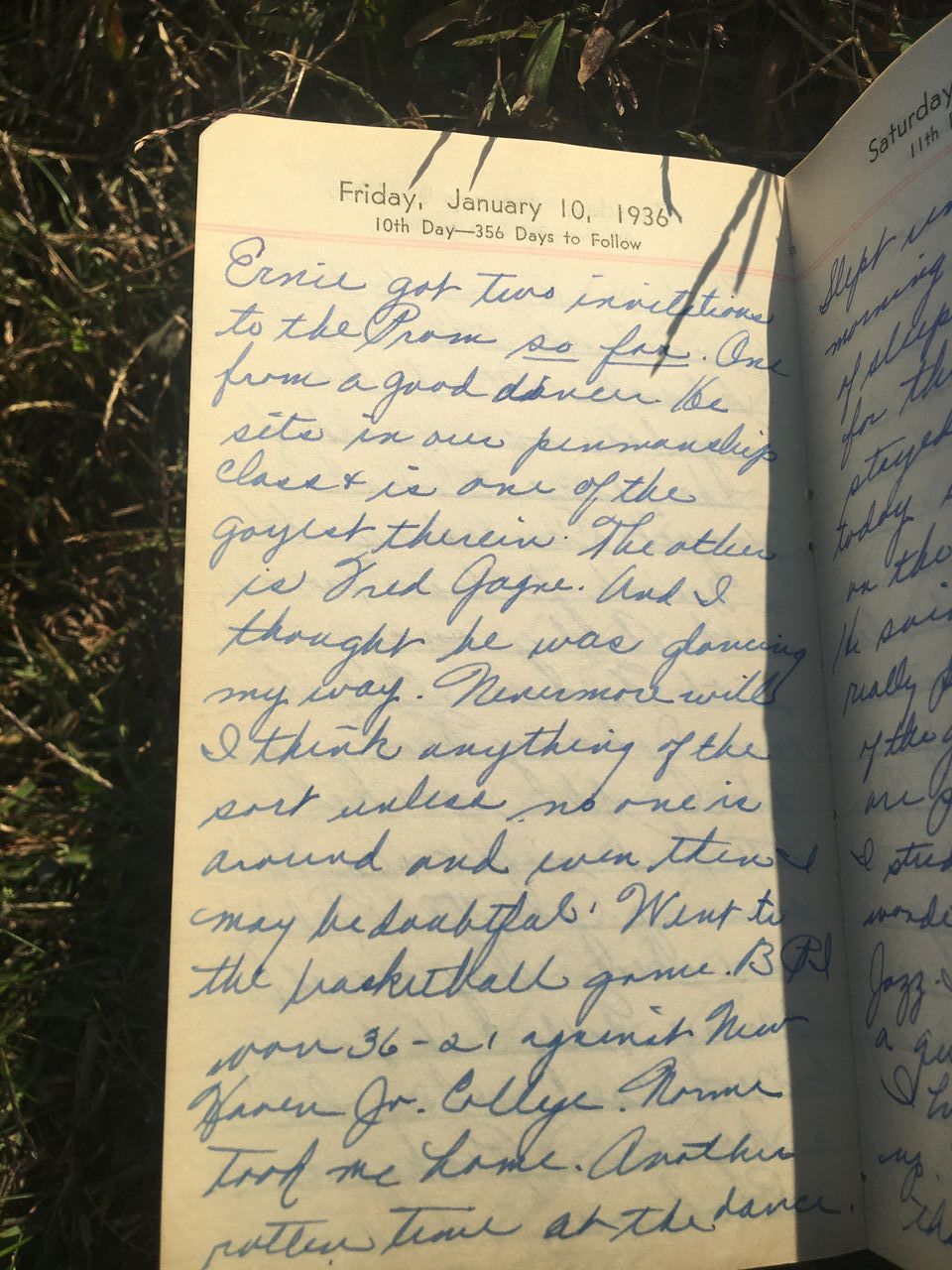 Why does she never get a date for prom?

Tuesday, December 24th, 1935
Had exmas supper with the Olbrychs at our house.  Got no presents but don’t mind a bit.  Johnny wanted a Christmas kiss but I demurred.  I said I didn’t believe in it and I don’t.  Caveman sent me a lovely card.  Got one from Joseph Dudek. 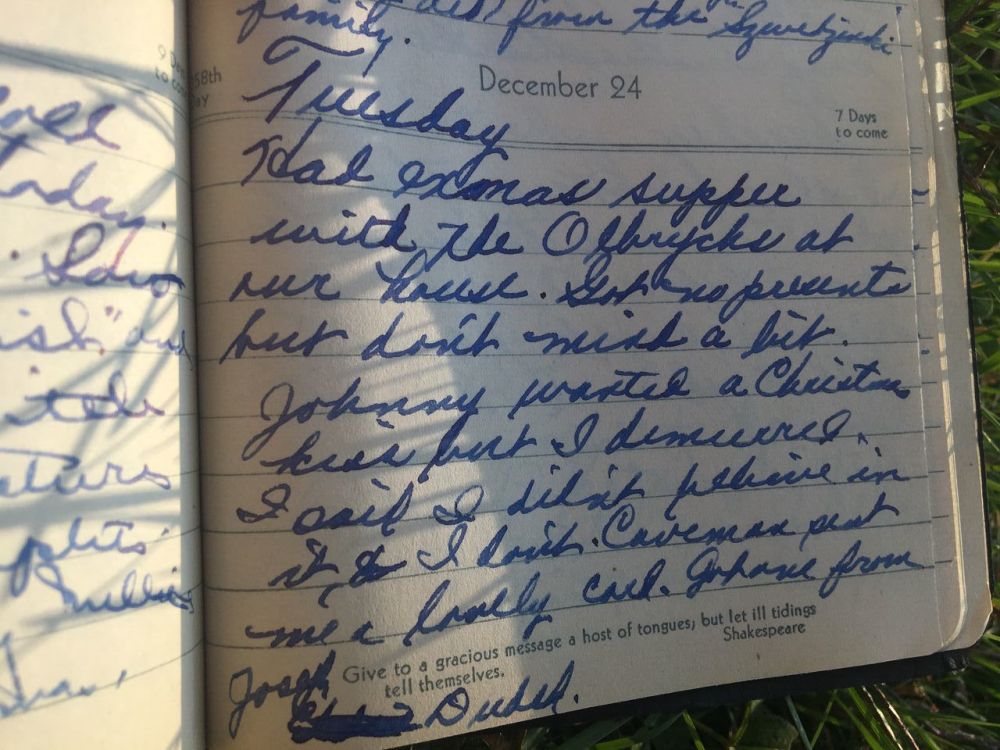 I love how she writes “Exmas.”

Wednesday, December 25th, 1935
A happy Christmas day.  Only Jaime disappointed me.  He sent me a sweet heart card (I hate that) and a five lb box of candy.  Zosh and I saw “The Crusades.”  She had supper up at the house.  Our “story teller” “Mike” was there too.  Then I played and we sang Christmas Carols.

This seems like something out of a black and white movie!

Wednesday, January 1st, 1936
Went skating this afternoon down to Bemis Pond with Zosh.  We have to share my skates between us.  Jaime was there.  He’s a lousy skater.  Chico + Vincent were there, too.  My cousin from Holyoke was up, too. (At home, I mean.)  We went back to the pond at 8:00.  There were two girls and only boys.  It’s perfect skating by the light of the moon and stars. 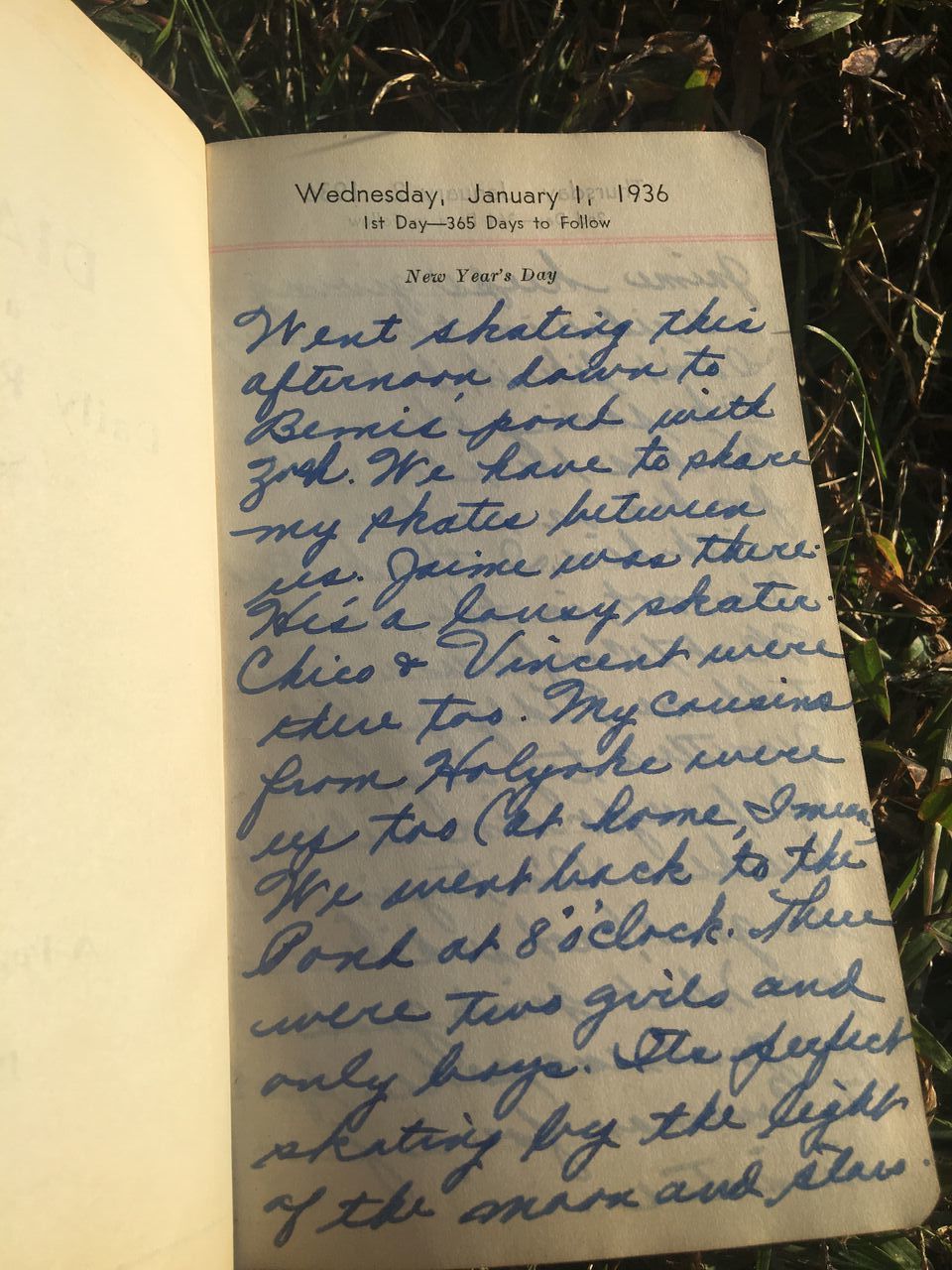 You know that this is one of my faves. ❤

Saturday, January 18th, 1936
Winter has set in.  It snowed all day.  During noon it came down in huge feathery flakes, but all afternoon it was half snow and half rain.  Now it’s beautiful out.  It’s so peaceful.  No noise (except the landlord at the furnace downstairs) Shadows are cast here and there and I think the moon is out.  The Professor gave me a piece which he composed.  It’s name is “The Gruppetto Melody” in the melody of the Turn.

Sometimes her propensity of story telling and ability to set a mood just get me.

Friday, January 31st, 1936
Diary, I went to the Prom on a blind date.  He turned out to be a boy from Bay Path.  He’s from Vermont and his name is Maurice Bouchard.  I’d go anytime if it were someone like him.  He’s quite tall, dark, but not too dark.  I like him but I didn’t register.  He’s a gentleman.  Never held me tight or tried to kiss me.  I don’t think I’d have minded, but I like him all the more for not trying to.  Gave me a beautiful corsage.  Met Norma’s brother.  We went to the Wayside afterwards.

Sometimes you have to take a chance!  I can’t believe she went for the blind date but it sounded like a wonderful night.

Wednesday, December 18th, 1935
Found out the men (young men) talk funny.  So it seems to me.  I was holding Vicki Lewok’s baby.  The baby’s name is Marylin.  She was up the house.  It started to wail a little bit.  I asked what I should do.  Jimmy Dudek say, “Show him your tit.”  After a little squirming the babu settled down.  I helped her for a long hour.

This passage got Babu snort-laughing.  All these years later she still thinks it’s funny!

Monday, January 6th, 1936
Ernie told her brother what I told her about wishing he was older because he plays the harmonica.  Why did she?  Zosh and I went to the library.  Met Teddy Drewniak and George Murphy there.  We talked about school, jobs, etc.  Teddy looks at you as if he were in love with you.  He’s so tall and I had to look up at him.  He’s a P.G. and is thinking of going to school.  Business I guess.

That awkward moment when your friend tells her younger brother that you think he’s cute…because he plays the harmonica!  ❤

Friday, February 21st, 1936
Met W.B.Z. Today.  I was going to the post office to mail some diapers to Chochia.  She’s going to have a baby.  I was going down School Street and someone was just dragging along (eating peanuts, I think.)  He saw me cause I was in front across the street.  I went to the P.O. and when I came out he was standing on the corner across the street.  I went along, looked, and said nothing.  Then went a few steps further turned and said hello.  He recognized me.  What luck!

When you read this, didn’t you actually see it all playing out in your mind exactly how it happened?  I did and it is because she is such a powerful story teller!