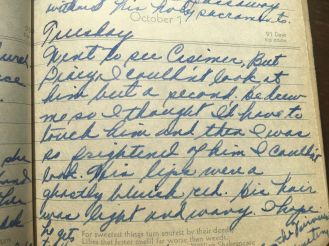 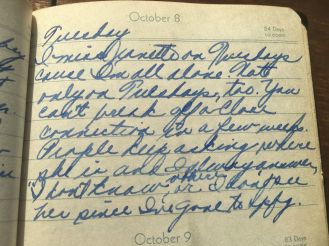 Tuesday, October 1st, 1935
Went to see Casmire but, Diary, I couldn’t look at him but a second.  He drew me so I thought I’d have to touch him then I was so frightened of him I couldn’t look.  His lips were a vastly blueish read.  His hair was light and wavy.  I hope he gets to heaven.  He’s being buried in the Fairview Cemetery.

RIP Casmire, I have the same hope for you as Babu did.

Tuesday, October 8th, 1935
I miss Jeanette on Tuesday cause I’m all alone.  Not only on Tuesdays, too.  You can’t break off a close connection in a few weeks.  People keep asking where she is and I don’t know where or I don’t see her since I’ve gone to Spfld.

She doesn’t always show her feelings in her passages so to hear her pine for her friendship so often shows how much it really means to her.

Thursday, October 10th, 1935
What a scandal, Diary!  Mrs. Gurka has left her husband.  She took Ruth with her.  Had a test in Math on interest today.  I think I got a good mark.  Oh Diary, W.B.Z. goes out with Adele.  He gave her his Mass State Banner.

I guess the topic for the day was broken hearts!

Friday, November 29th, 1935
Wanted to sleep late this morning but mother tossed me all around the bed trying to get the sheet off that I gave up the idea.  Went to the movies.  Saw “Hold That Venus” and Buck Jones in “The Lone Rider.”  Johnny Krol came up for a while.

I thought I’d include this passage to share what was either a little levity between Babu and her mother or more of the unrest at home she has mentioned but has not explained why.  Also, Johnny is a character from these pages I’d love to  meet.  Sometimes Babu writes her name in quotes which makes me think it was a name she chose as opposed to was given at birth.  Babu wrote in a passage a few months previous that she “likes her a lot more now that she’s not so rough.”  She’s a little bit of a rebel and I’m glad Babu was friends with someone like her.  I wish Babu could remember who she is when we share these passages together but she doesn’t.