What a difference “two weeks” makes:

Saturday, August 18th, 1934
We started for home at quarter after three and got here at 6:30. I’m so excited I can’t eat. Saw a Caveman and Penny. But Caveman as usual was silent. Jeanette wrote me a letter but gave the wrong address and it came back so she gave it to me today. Oh! She wrote that Caveman had someone new and she’d tell me when I got home. She did. It’s Babe. Alice’s boyfriend took us to a picnic in West Springfield. I went to bed at one got up at three and hung around unable to sleep. 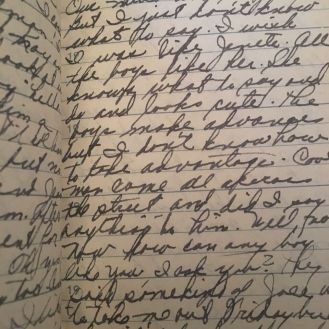 Advances and Advantage.  Are you playing with words, Babu?

Monday, August 20th, 1934
They are starting again. Our meets and everything. But I just don’t know what to say. I wish I was like Jeanette. All the boys like her. She knows what to say and do and looks cute. The boys make advances but I don’t know how to take advantage. Caveman came all across the street and did I say anything to him. Well, no. Now how can any boys like you I ask? They said some kind of Jake wanted to take me out Friday but he didn’t look as though he wanted to be introduced.

Tuesday, August 21st, 1934
Honest to goodness I could choke myself. Caveman made an advance. And do I take it advantage. But I never take advantage of anything. Why can’t I be able to tell the right answers like Jeanette and be popular. But now, I should be as I am and not wish. But yet. I should develop. How can the boys like me if I am so unresponsive. And especially I liked him so much tonight. He looked up so dear. It almost broke my heart to see him turn away.  Crush world.