In yesterday’s post I thought I could just show you what Babu wrote in March and let it speak for itself but I cannot.  I am brimming with feeling about it.  Mostly, I am so frustrated with Babu.  It’s easy to judge, it’s easy to judge.  I know.  But I do not think this woman ever knew her worth.  She surely doesn’t now.  She used to express her concern that she was “a burden” and was “just a big baby.”  We never allowed her to feel that way and she hardly ever says that any more yet I feel she has simply found a new iteration of the same old tune.  She will say “I’m making up for husband.”  It is exactly the same script every time.  And if there is a day when she doesn’t say this to me once, there is another day she says it three different times.  If anyone ever caught me being impatient with Babu, it is at these times.  And at times when she calls herself a dumbbell.  When she gets on this track, I feel it is so important to tell her:  “No, Babu.  You are here because you have your own purpose in being here.  You are here for a reason.”  She will look down at herself, and I know what she’s thinking, and she’ll say:  “What good am I?”  And every time I tell her how I had two grandfathers and four, count ’em, four, grandmothers but they all passed much younger than she did.  I tell her how much I value my relationship with her as my last grandparent.  I tell her I value her advice and that I laugh all the time with her.  She will say: “But my beautiful husband was a brigadier general!  He ran so many important things and had such responsibility!  He was so smart.”  “You are smart, too, Babu!”  She always at this point is an eye roll.  “I think that’s why he began smoking, his job.”  And we talk about how that killed him.  And why?  There are never any answers.

I’m thinking of that now not only because I just came up stairs after that conversation but because of what I read in March’s passages.

After supper went to church and to confession, washed my hair, did my nails, and listened to the radio. Doesn’t seen as though I were going to have a date with Jakey. Maybe he gave me up for lent.

Johnny looks so nice and we had a nice talk on the back porch. He wanted a date but I can’t make it.

And we shall have snow: This morning we awoke upon a snowy world, getting snowier. Bought a sweater this morning.

In this penetrating cold Johnny walked me home.

Emmy and I are back on good terms. Thank heavens! But I wonder for how long. We worked very industriously as usual.

I don’t mind going to work half as much lately. While I’m working I still have occasions to think of other matters and lately Jake has been on my mind too much, and seldom favorably. I wish he were more of the type I’d like to marry.

And then, there is this gem:

We didn’t get home till 1:30 and it wasn’t my fault. Once there a kiss was so dangerous I grew afraid. He asked me to marry him, but I told him he was only fooling.

These are some quips from other months:

Got home almost at 12, dying to see if I got any Valentines. Three! But nary a one from Jakey. Johnny Lech’s told of love, John Dudeck’s of Friendship, and Ernie Depathy’s of attention.

I’m getting that low feeling again and Zosh is riding high. Eddie is attentive to her and Frank to Nat and John to me but it doesn’t help me feel better. I don’t care for him.

The kids came up about a quarter to nine and we started out. First bought crullers then cider, then cups. Saw a fire in Agawam and crossed fields, streams, hills, etc. to get there. Left for Westfield and ate our feast at a cemetery. Back to the city for peanuts and up to see Ernie. Got her out of bed and fed her in the car. John acts so good to me. Good and I don’t deserve it cause I’m so cold.

I mean, I’m just opening documents at random and I easily stumble across passages I just love.  Who writes like this?!?!  “a lovely lone gardenia?”  With out even taking the effort to look them up I can tell you of other passages that maybe didn’t knock me out of my seat, but I remember them.  They were passages I would reread, or read out loud to my husband or simply out loud to myself to hear them, to taste the words.  I’ll always remember Babu writing about seeing Jeanette and Teddy on her porch and the simple observation of his hand on her knee and it just told the whole story including how lonely Babu was.  I remember her writing about first meeting Ernie and you could see her insecurity showing through as she wrote about how beautiful this potential new friend was.

And I keep trying because it feels important.

And here is what it is:

And I do not even think she is trying.  Why would she?  These are her secret diaries she never let anyone read and she never thought anyone would.  What would have happened if she was trying?

It just kills me that she never pursued this further.  That, besides these pages, she never wrote.  Why are there no poems hidden away around the house?  No dusty manuscripts?  I’m not asking why she didn’t get published, but why didn’t she (maybe?) have the courage to put pen to paper for herself?  Or her friends?  Or later on her children?

We talk and she says with misty memory, but not misty eyes, that she thinks she would have liked to be a writer.

Then why?  Why didn’t you write poems or stories, or essays about house keeping or fashion, or…

I think of Zelda Fitzgerald and see some of it in Babu.  A woman overshadowed by a charismatic and powerful husband.  I also hear the Bell Jar toning in the distance.  The Bell Jar of motherly, wifely, womanly expectations.

But she wrote letters.  Were they like these pages and where are they now?  I have run across none of the replies.  Babu seems like the person to keep letters.  Maybe they are somewhere in this house.  Maybe one of her children have them.  Maybe they weren’t saved.

And she wrote every day in her diary.  I wonder if the daily practice continues her whole life.  I imagine from looking at the pile of diaries that it becomes less and less as she grows up.

But they are something wonderful.

They are her autobiography. 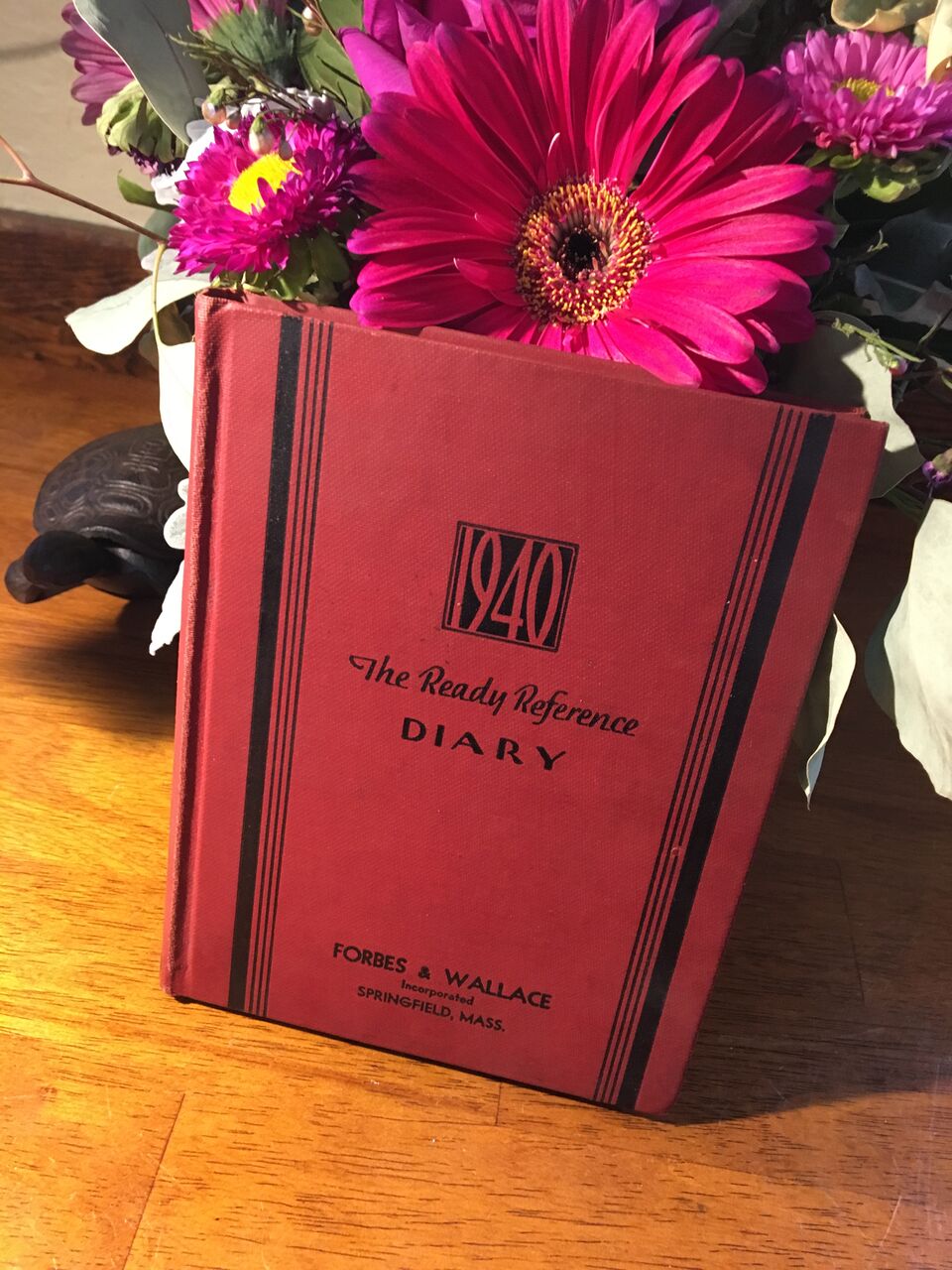 And here I am and I’m ripping them off.  I am.  I am just so in love.  Consider it a reblog,  Consider it whatever you want  These words are beautiful and I am obsessed.