Ernie, the ever traveling transplant from Vermont takes Babu’s Suitcase and “quite a few clothes” but she gets them back later in the month.  Johnny Lech comes by and gives her some Snapshots, (I’m guessing these ones:) 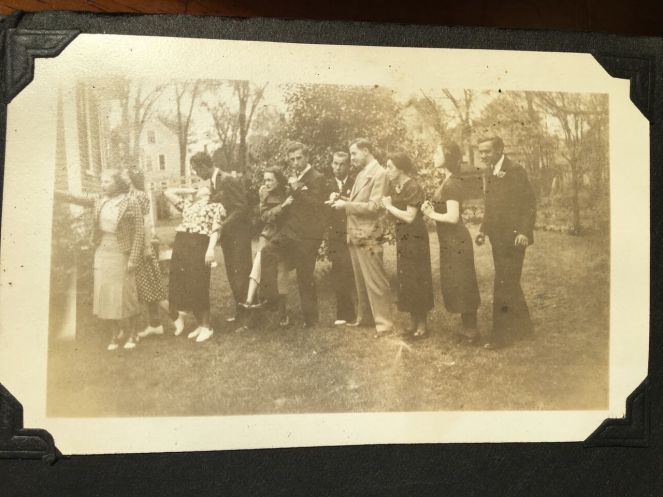 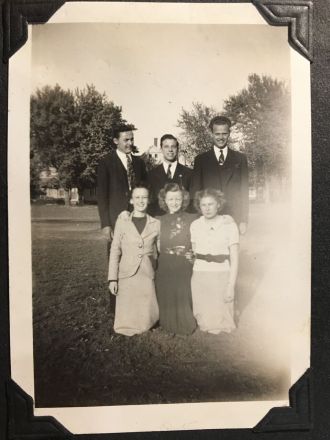 and tickets to a pop concert.  There was a cast party where she played Spin the bottle.  She goes on a trip with the Nee Wah club and Gabby Slips her a night cap through a whole in the wall of the hotel they are staying in.  Jake Stefanik walks onto the back porch while Babu and Johnny are kissing.  She meets Johnny L.’s father who is Shorter than him.  They have decided to buy L.C.Smith’s for her office.  She goes Shopping with her mother in the rain.  By all accounts, Ernie and Jeb seem to be in love, yet he Stands her up for the formal.  Johnny Krol has a dog named Benny but it’s not the Benny Babu was hoping to see.  Babu gets a cute pair of gliders and Johnny carries her from the car to her door to keep her Shoes from getting wet in the rain.

And now for the Social event of the Season:  The Social at the Holyoke Canoe Club!

Johnny gets her purple flowers and she has borrowed Ernie’s peach dress.  They had a great crowd and she even sees W.B.Z. there but he doesn’t seem to be having fun.  They rollick after, out to eat, home at two.  No matter how they tried they couldn’t reach Jeb, therefore, Ernie was not with them.

Depathy asks her to go on a trip with him and some friends at some point later to the beach.  This could be important.

And not because Babu runs out on Johnny during a dance to get ice cream with Depathy in the rain.  Johnny seems not mad at all.

Babu is Struck by a thunderbolt when Johnny Krol confesses that she is thinking of becoming a Sister nurse.

***At first I was going to omit the part about Babu playing spin the bottle.  However, I figured, she is twenty years old and every red blooded American girl has played this game at some point, right?  As I write this is realize I never played that game.  Or seven minutes in heaven.  (I did play light as a feather stiff as a board a few times.)  I guess I was never invited to the cool parties!