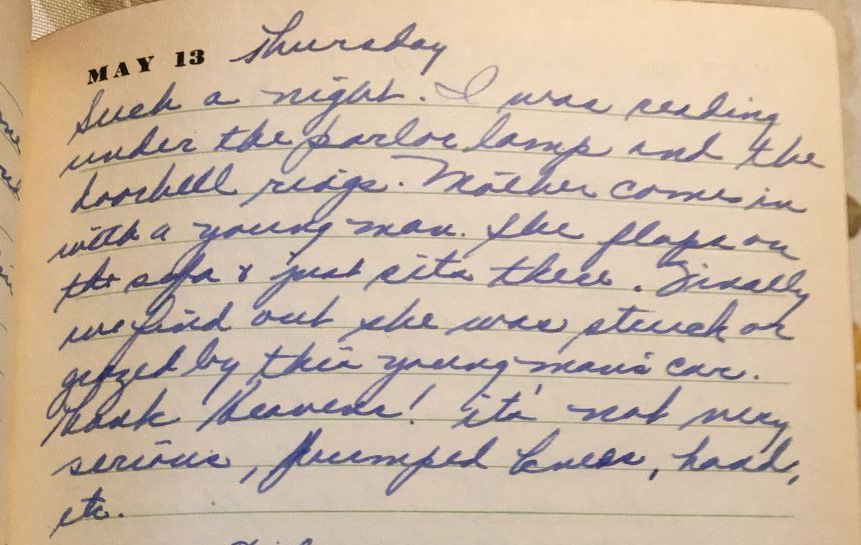 Thursday, May 13th, 1937
Such a night.  I was reading under the parlor lamp and the doorbell rings.  Mother comes in with a young man.  She flops on the sofa and just sits there.  Finally, we find out she was struck or grazed by this young man’s car.  Thank heavens!  It’s not very serious.  Bumped knees, head, etc.

“It was almost the end.” 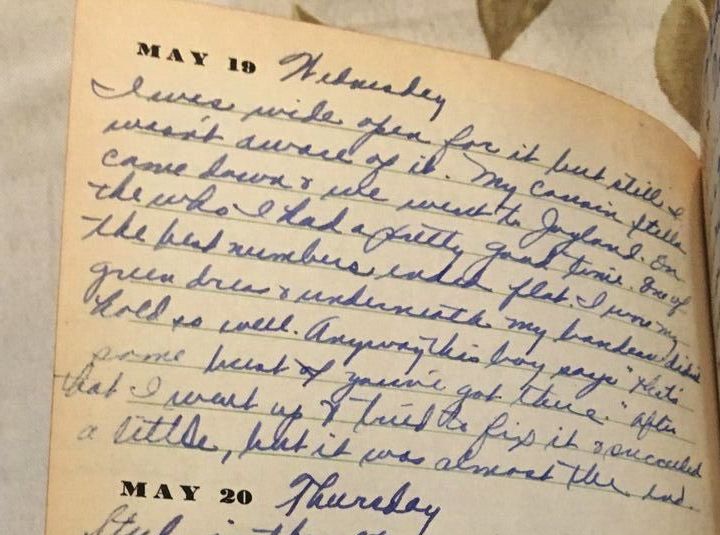 Wednesday, May 19th, 1937
I was wide open for it but still I wasn’t aware of it.  My cousin Stella came down and we went to Joyland.  On the way I had a pretty good time.  One of the band members ended flat.  I wore my green dress and underneath my bandeau didn’t hold so well.  Anyway this boy says:  “That’s some dress you’ve got there.”  After that I went up and tried to fix it and succeeded a little, but it was almost the end.

Put an end to it:

Thursday, May 20th, 1937
Study in the afternoon with Maurice and I keep stealing glances at him.  Aunt Nelly was up for a while.  Ernie got a letter from Harland.  The prom is the 15th so I don’t see how we can go in the middle of the week.  Rehearsal tonight.  Ray got the car.  Only Sally was missing.  I sat in the front again and was taken home last.  Went to South Hadley to a place called the Buckwood.  Danced, ate, and drank.  It was fun.  Think Ray likes me.  Will have to discourage it cause I like him but not to a certain necessary (?) point.

Friday, May 21st, 1937
Oh!…. And I thought I wouldn’t have a good time at the dance.  Wore my Durnell dress.  Sat out the first three numbers but after that— every one, and good dancers.  Coronation march and waltz with my husband, Benny.  Then we, Benny’s friend and two girls, went to “Bray’s” and danced and ate.  Frank Olbryck and his girl just kissed and kissed in the back.  Benny made a motion but I checked it.  I might not have if we went alone.  It’s 12:30.  Some dance!  Benny’s birthday and we celebrated.