To be completely cliche- these excerpts are the good, the bad, and the ugly of April, 1937.  It seemed appropriate because this month was such a mix of highs and lows. 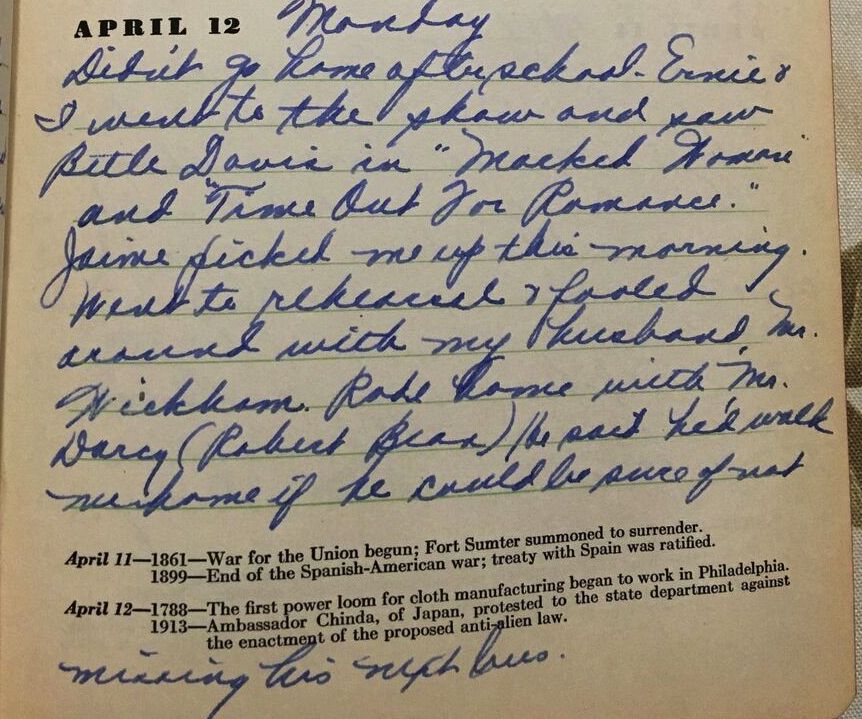 Monday, April 12th, 1937
Didn’t go home after school.  Ernie and I went to the show and saw Bette Davis in “Marked Woman” and “Time Out For Romance.”  Jaime picked me up this morning.  Went to rehearsal and fooled around with my husband, Mr. Wickham.  Rode home with Mr. Darcy (Robert Bean.)  He said he’d walk me home if he could be sure of not missing his next bus.

Friday, April 16th, 1937
Got up had breakfast and took the car to school.  Had loads of fun on the car.  Back to Ernie’s after school, supper, and then rehearsal.  Mr. Wickham is not so attentive as he used to be.  I’ve slipped.  Every night he brings something to eat.  Tonight it was peanuts.  Offered some to Mr. Dudley and he took a handful.  Wickham started to mutter and Dudley asked did he think he’d take one, and he said “ All right, but I didn’t tell you to fill your pockets.”  Missed the 11 PM bus and had to wait.  A tipsy man and two women provided fun.

Sunday, April 4th, 1937
Went to see the place we’re to move to and it look all right.  There’s a kid living above and makes a lot of racket so we may not like it.  Had rehearsal at Bay Path and then at Frank’s afterwards.  Zosh and I went to the St. Stanisalv’s hall and we danced all the time.  Danced three times with Eddie Knapp.  He took us home and he and I rode over to the city to have some hot chocolate.  When we got home he tried to kiss me.  Of course he didn’t succeed.  He said if he were looking for a steady girl he’d pick on, one like me.  I guess I’ll never hear from him again. And I do think he’s nice.  (He gambles.)

Friday, April 23rd, 1937
Walked around school with my curly head.  Frank Janik came up to the school and I gave him a ticket.  Had to do some extra work in the office.  Benny asked me to go with him afterwards.  The play went off well according to reports.  The place was packed.  Dick Laughlin, Marion, Benny, and I went out. It was late so we just ate out.  Showed Benny Chicopee and took him home and then we came home.  Doesn’t seem like we’re to give the play again.  Drobe and Andy had the car too.  We might have gone out.

Friday, April 2nd, 1937
Mother and Dad are already sleeping so I don’t know for sure but I think we’re moving up on Northwood Street.  (Adele Janik lives there.)  Went to rehearsal and spent most of the time listening to Frank emote.  The announcement of the play in the paper, and the show will go on even though we’re not prepared.  There was a minstrel at the high school and I danced two numbers afterward.  Had my anklets on.  Henry Wojtoiewicz was there but no Zosh.

What could possibly be ugly about theatre?

Thursday, April 15th, 1937
Went home with Ernie after school.  Her aunt and uncle went to Washington so the kids are keeping house.  Her Uncle George gave us a ride down to rehearsal.  Afterwards, Ernie and I were waiting for the car and Mr. Brendel, who had Mr. Wickham and Mr. Bingley (Walter Cleland) with him, drove us home.  Sat in front.  Mr. Wickham is a scream.  Got to bed late and John came in after 12 and started to play his violin. 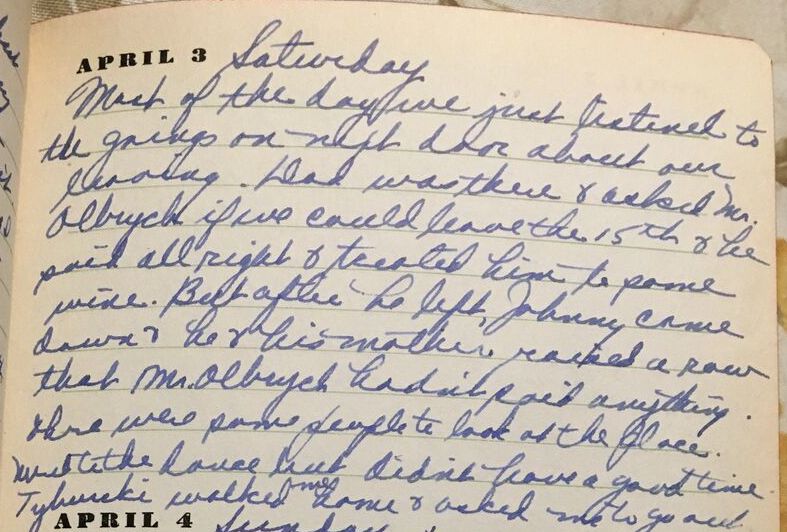 Saturday, April 3rd, 1937
Most of the day we just listened to the goings on next door about our leaving.  Dad was there and asked Mr. Olbryck if we could leave the 15th and he said all right and treated him to some wine.  But after he left Johnny came down and he and his mother raised a row that Mr. Olbryck hadn’t said anything.  There were some people to look at the place.  Went to the dance but didn’t have a good time.  Tybenski walked me home and asked me to go out. 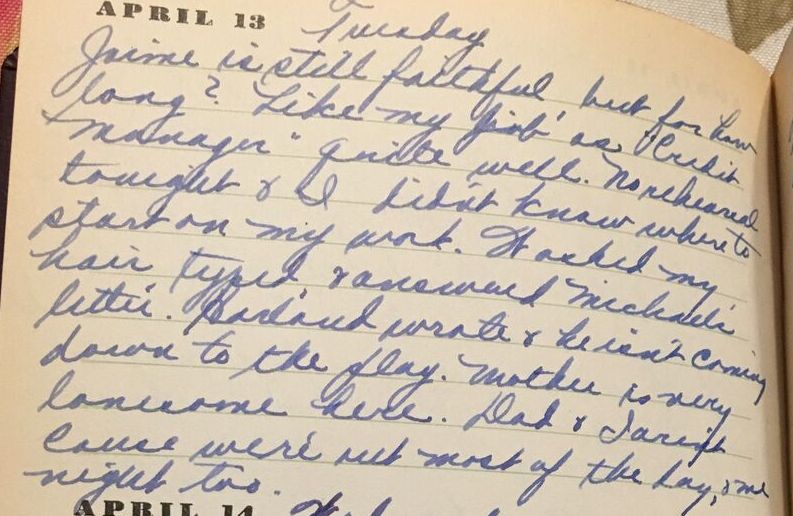 Tuesday, April 13th, 1937
Jaime is still faithful but for how long?  Like my job as “Credit Manager” quite well.  No rehearsal tonight and I didn’t know where to start on my work.  Washed my hair, typed, and answered Michael’s letter.  Harland wrote and he isn’t coming down to the play.  Mother is very lonesome here.  Dad and I aren’t cause we’re out most of the day and the night, too.

I can’t stand to hear of her Babci being lonely!