She stays up late reading “Love Lightly.”  She squirms under the stern gaze of Mr. Fitzgerald, (I get the feeling he is a principal.)  She is not happy about getting a C in History and like most teens blames it on her teacher.  She goes to see “Moulin Rouge” with Franchot Tone (not Ewan McGregor) and I’m beginning to understand he was a big deal, (Tone, not McGregor, although I have a clear favorite.) 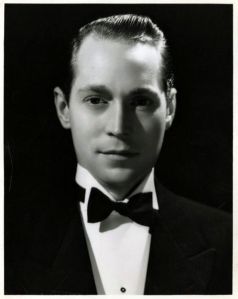 Jeanette has two set of initials on her notebook. Hers and Robert Sullivan’s and mine and Jubron Ferguson’s.  I think he’s so magnetic.  He has a forehead like Franchot Tone.

Buahahaha.  Ok, I get it now Babu.  It’s all about his forehead.

Took me a moment to recognize Shirley Temple!  And I have to say – from this clip anyway – Tone cannot do as good of a grumpy but loveable character as Bogart can.  Less loveable, more just a jerk.

The poor girl goes to a dance and her father accidentally locks her out in the hallway to freeze all night.  Why didn’t she knock until her parents woke up?!?!  I guess she couldn’t bear to wake everyone in the apartment complex up!  Everyone seems to have heard the story before she can tell them.
She gives up sweets for lent, really just an excuse to diet, and calls her self dumb for not being good at puzzles.  Grrr.  But what can you do about the insecure teenage stuff?

Auditions for the one-act play are happening.  She is so scared to audition but poo poos her friend Willy’s chances of making it.  Before the month is out she does audition and is truly impatient about finding out “the out come.”  “Gee, we’ll have to wait long.”  I hope next month we find out although I have little hope.  I know she did not get a part in 1935.

There is a “65 mile blizzard” and Babu has to miss church because “there is so much snow you could drown in it.”