I have fallen behind on the challenge, but that’s ok!  “Blame Naw’lens.”

Yes, we try our best to never be those people, but I can blame our New Orleans vacation for the reason I have not been posting.  It has been a bit uneventful but very relaxing.  Anyway, here is the post I began writing…

This is, I guess, a throw back Tuesday.  We are going back to 1939.  Why?  Because I began this post with April A-Z in mind, maybe as much as a year ago.  There are certain things I read that just perk a nostalgic interest.  This passage about a nickelodeon was one (and it wasn’t just my nostalgia for my childhood of kids shows and green slime.)

We kidded Jakey about having an article in the paper about his new job.  Billy, Yvette, Frank, Mary Nolan, Jakey and I went in the Veale’s car to Amherst-“Van’s.”  Had some beer and did some dancing to the Nickelodeon.  This morning Jakey said he could get a kiss anytime, so tonight I wouldn’t let him kiss me.  He felt very bad so after quite a while, I relented, but he didn’t get very many.

You go, Babu!  Playing hard to get, especially to make your point, is such a power move!  You showed him!

And having some beer and dancing to the nickelodeon?!  Like usual, clear images pop right into my head when she narrates her life.  I can hear the music and see her trying the Charleston or whatever current dance she is using to “cut a rug.”

So, what is a nickelodeon?  This page gives a pretty good explanation.

Although the meaning has changed over the years, a nickelodeon is a jukebox.  But look at these amazing images! So pretty: 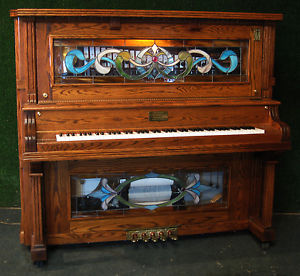 I cast my vote today but in vain.  Stovina did not get elected.  We knew very early in the evening, so after the Nee-Wah meeting we left the people congregated in front of the City Hall and Ernie, Billy, Edmund, Romeo Skowyra, Jakey and I drove to “Shankie’s” and tried to forget with beer and a nickelodeon.  Wonder what conditions in Chicopee will be like now.

Nothing beats away election blues like a nickelodeon.  If only we still had those in bars a few years ago…