Leave our home and head to the top of Bonneville.  Take a left and go down Fairview which shifts onto Abbey Memorial.  Pass the cemetery and Szot Park and come to the lights.  Take a right then a quick left, unless you want some Papa John’s.  You are in what my husband and I and all the locals simply call “The Plaza.”

Many years ago, it was The Springfield Airport and a young and in love couple used to go there and “watch the mail plane come in.”  That is innuendo for parking.  Which is in turn innuendo for making out!!   The early passages about this are so sweet.  Please check out this link:

How Do You Know?

If you are new to the blog that is an informative and adorable post you certainly should read.

Nothing turns my face bright red faster than reading about Babu and Jakey at the airport.  It’s like that time in high school when I watched American Pie with my gram – my mother’s mother.  She died laughing throughout the entire movie, proof she understood the jokes.  I knew not where to look, what to do with my hands, and certainly not what to say.  That’s similar to how I feel reading passages like this:

Got invited to a party at Hampden Ponds but when we got home found out Ernie and Jeb had called so we rode out there and all went driving for hours.  Then we two went to the airport and got into trouble (slight).  Vowed to each other – no more parking.  Got home at nearly two.

There are some things about your grandmother you are not supposed to know.  Well, I’m older now and not so prone to mortal embarrassment.  Maybe it helps that she is my husband’s grandmother and not a blood relative because I find myself a-ok (mostly!) with her human sexuality.  I support her candid way of speaking of these things if only to herself.

We (just the two of us) ended up at the airport.  That’s where we can relax the best only we always come home late.

Found on a website:  Abandoned and Little Known Airports

OK, I don’t know if that does anything for you.  A “3,000 X3,00′ area” does nothing for me compared to descriptions of her and Jakey spending the midnight hours there.

I guess it has rained practically every day this week and tomorrow’s prediction is also more “Aqua.”  Billy, Jakey, and I stayed at home tonight just lying around.  Then Peaches and I went for a ride.  It didn’t last long cause we drove into our stall and almost drove ourselves to destruction.

It makes sense that he would choose the airfield to take his love, beyond reasons of night time seclusion and proximity to their homes.  I will be writing much more about this in coming posts, but Jakey has fallen in love with flight.  The thought of flying may be as romantic to him as his girl.  But, like I said, more on that later.

Perhaps the greatest ‘claim to fame’ for the Springfield Airport came when it was home to the Granville Brothers, the creators of the famous & outrageous “Gee Bee” series of racing planes in the 1920s & 30s. Searching for adequate facilities to manufacture their biplane, the Granvilles contacted the chamber of commerce of Springfield in 1929, and on July 6 finalized plans to locate at the airport there.

Now this actually is a bit of interesting history of my hometown.  I could link you to the Wikipedea page on the Granville Brothers Aircraft.  I think with the information provided, just some pictures of these awesome classic airplanes should suffice. 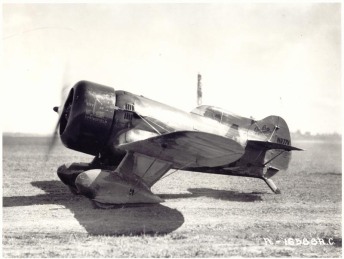 Today the area where the airport once operared is a shopping plaza.  I go there at least once a week for groceries, the hardware store, a million other things.  Here is an image of the plaza which is relatively recent and the abandoned control tower that stayed throughout the air field’s transformation and the plaza’s many changes:

It rained all day.  I hurried home after I bought a few things.  Took a bath and dressed.  No one was home at Cookie’s house so he had to make his own supper, press his pants, and take a bath; all within a little over an hour.  We went to see “Honeymoon in Bali” and “Stop, Look, and Love.”  Had some ice cream and watched the mail plane in the rain.  I told Peaches I couldn’t trust him and he said he knew it.