Babu told me a story of a boy who worked at the corner store and how he would run over to the store to work everyday when school children were on their lunch break.  He would pick on her for how she said A pricot.  Or Ahpricot.  I’m not sure which one she was.  She would call the other back to him.  The taunting was so adorable that Adam and I both began adding apricots to her breakfast fruits.  She never caught on to why we did that, but it is in honor of that story.

That boy became her husband.

Teenage angst?  She is about to turn 20, but it still rears its ugly head every now and then.  Over what?  Boys.  You guessed it.  Right now there is a such an up and down, back and forth, with Johnny.  Oh yea, remember when I wrote how she dropped him like a bad habit?  She was just not that into him?  Well, that didn’t stick.  Exactly.

Wednesday, February 2nd, 1938
Yesterday and Monday I like John a lot but not tonight-and he showed some of his affection, too.  Went to cooking class and then the boys took us to the Butterfly.  Only half of Butterfly is there now.  Emmy is still suffering with her cold and didn’t come in.  Gosh I wish Benny were here.  I want someone.  Just now not anyone.  Will have to break off with John.  This can’t go on.  It’s really steady.

She is certainly fighting it!

There are certainly some signs she should:

John is falling for Joan, I guess.  I don’t seem to have much influence.

On the way back we met Johnny and Eddie fooling with some girls.  Just said hello and went on.

Supposedly, he even tries to kiss Zosh!

Nevertheless, something seems to be changing:

Monday, February 14th, 1938
Valentine’s Day.  Someone sent both Mom and me candy in the shape of red hearts.  No signature.  Natalie was the only one who got a valentine’s Day card.  Rehearsal and we stayed longer than usual.  First John says my eyes sparkle and talk and then that my hair is shiny.  I almost fell asleep in his arms my eyes are so tired.

Well, Valentines day can get the best of any of us and we let our defenses down, right?

Wednesday, February 23rd, 1938
The play is only two days away.  It’s still dragging at rehearsals.  Lately I’ve been dreaming about being married.  Johnny is always telling me how my eyes shine.  I wonder if I saw Benny would I like him all over again.  I don’t cry any more now.

Well, this is certainly looking good for Johnny!

Saturday, February 26th, 1938
Drobe’s club had their dance tonight and we all went.  The boys were there too.  I had a splendid time.  Helped one boy with deductions for income tax.  Drobe was going to give me flowers but I didn’t see him later.  Came home with the boys.  Wouldn’t have minded if J.L. kissed me but he’s afraid I guess.

Or maybe he is just so confused! 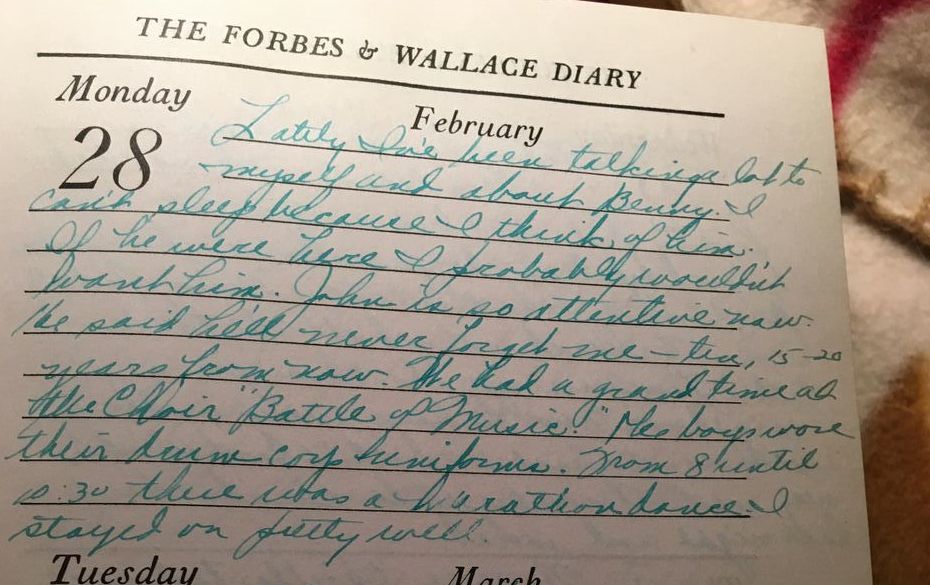 Monday, February 28th, 1938
Lately I’ve been talking a lot to myself and about Benny.  I can’t sleep because I think of him.  If he were here I probably wouldn’t want him.  John is so attentive now.  He said he’ll never forget me 10-15 years from now.  We had a great time at the choir “Battle of Music.”  The boys wore their drum corps uniforms.  From 8 until 10:30 they had a marathon dance.  I stayed on pretty well.

I thought she was over Benny?  Is she suggesting that she is?

All the while she is still writing to Benny and receiving letters but nothing expressing love, just “the same old tenses” she writes.  She is also constantly hanging out with Johnny.  I have observed that there is an order to put her feelings about Johnny in to make them make sense, and it isn’t chronological.  To make it all the more confusing, here is a sneak peak into March!

Tuesday, March 1st, 1938
What a night.  We went to the Drum Corps Social and has a goody time.  They boys took us to Howard Johnson’s.  I didn’t have any ice cream.  John brought me to the back door.  He said Eileen shrugged her shoulders when he kissed her and he wondered if I would.  I said he could try.  He did and very well.  I led the way after cause he was kinda afraid.  He lifted me up in his arms and spun around while we kissed.  The best me was half in the hallway and half out.  He cracked down on them and I felt myself falling.  I’ve forgotten Ben.  For how long?

(Note:  He kissed Eileen in play rehearsal as a part of rehearsal.)  Wow!  How romantic! 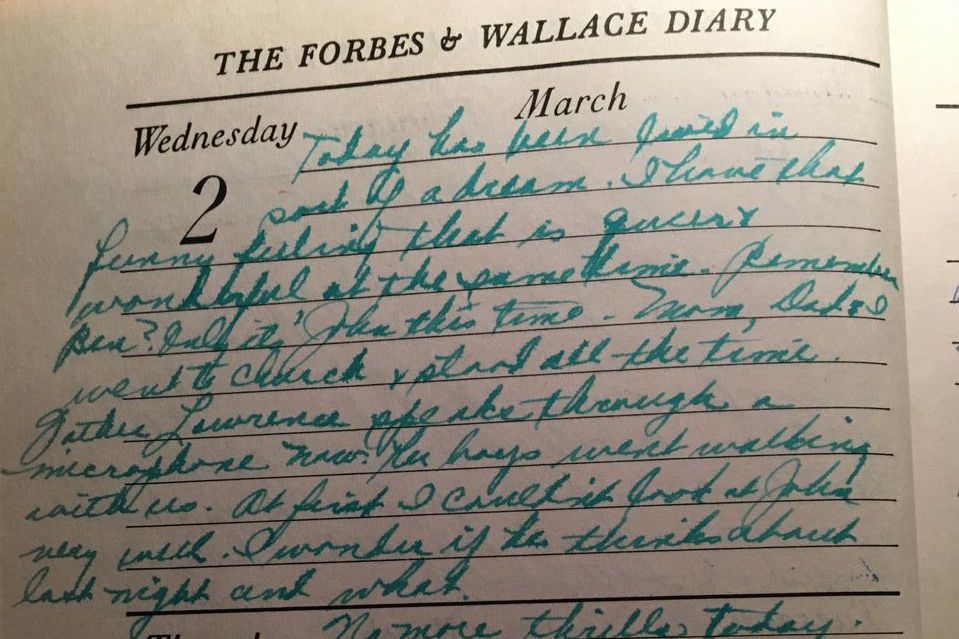 Wednesday, March 2nd, 1938
Today has been lived in sort of a dream.  I have that funny feeling that is queer and wonderful at the same time.  Remember Ben?  Only it’s John this time.  Mom, Dad, and I went to church and stood all the time.  Father Lawrence speaks through a microphone now.  The boys went walking with us.  At first I couldn’t look at John very well.  I wonder if he thinks about last night and what.

Sometime I trivialize all this boy crush stuff but her angst is real and if I were in her place, I’d be a mess.  She’s at least holding her own.  I think she was really hurt about Benny and she is smart enough, or jaded enough?, to not jump in head first.  It’s to be commended really but it can make a person lonely.  So, at the beginning of March, she seems to be embracing the idea of Johnny.  Will it stick?  Will it last the month?

Present day?  She is aging.  She has forgotten most of the boys in these pages.  She remembers most things.  Most days she is right on routine.  Shut the curtain when it gets dark, the rug needs to be on the floor so the carpet doesn’t get worn out, rinse her teeth after meals.

Rarely, she forgets the names of her kids, or asks me when I’ll be going home and I must remind her that I live here.  What concerns me the most is her loss of understanding how health works.  She doesn’t understand how she could have gotten a cold if she didn’t go anywhere.  She doesn’t know why she has a bruise on her arm, thinks it’s a rash, thinks it’s never going away. Wwhen I tell her it’s a bruise, she refuses to believe it because she doesn’t remember hitting her arm.

She had a miserable time with her cold because she felt “something was stuck in her throat”  and didn’t remember what phlegm is or understand that was gong to be there until she didn’t have a cold any more.

I don’t care about having to explain a million times, and I don’t mind her complaining.  I’m good at distracting her and keeping her cheerful.  But the problem is that all of that immediately means she’s old and coming to the end.  She has a bit of a fixation about it but only at times.  I wonder if she is ready to go sometimes and at other times I see her living fully and hanging on quite well.  How can you not think about your own death when you are 99?  But she is healthy, she is just fine.  It aches me to hear her equate every bout of constipation, every bruise, every day she’s tired, to immanent death.  It’s quite the tight rope caretakers walk.  I want her to understand that things will be different because of her age but that doesn’t mean she should hang up her hat just yet.