It has finally happened and it has warmed my heart.  The world is not so large as I once thought.  I knew eventually someone would contact me through the blog about someone they knew or about a family member they heard about but never got to meet.

Out there, even beyond the blogosphere, there is a cousin to Rita and Gaby Tetrault!  She stumbled across my blog looking for more information on the Nee Wah club and reached out.  It was heartening for me to find another person out there who wishes to keep family alive by recording their memories.  She shared a new picture with me!

What an interesting photo with many familiar faces, not to mention a familiar place.

We have reached an agreement to find and share information about the Nee Wah club and any of its members.  Between the two of us, we should know lots of stuff.  I will share as much as I can find here, and, if all goes to plan, she can create a Nee Wah page, add to it, and I’ll be thrilled to share that link here.

Let’s start with this picture which had no date on it.  It was taken at Toto’s Zeppelin.  I wrote about this place in this post:

This is some information I uncovered about the setting of this photo:

One year after Toto’s grand opening the restaurant/nightclub faced a licensing renewal challenge requiring it to withdraw its application until unspecified “improvements” were made to the facility. But a more serious problem was about to emerge when dirigibles suddenly lost their appeal following the May 1937 Hindenburg disaster in which 36 people perished. Not too much later, in November of 1938, fire would also completely destroy Holyoke’s Zeppelin. In rebuilding, Toto chose a moderne style with a pylon over the entrance.

I have done a little looking and the first post on here I found about the Nee Wahs was here:

There was not much information in that post but I remember reading about her hopes to be inducted into the club…and Ernie not getting accepted.  I dug back into the journals and found more information: 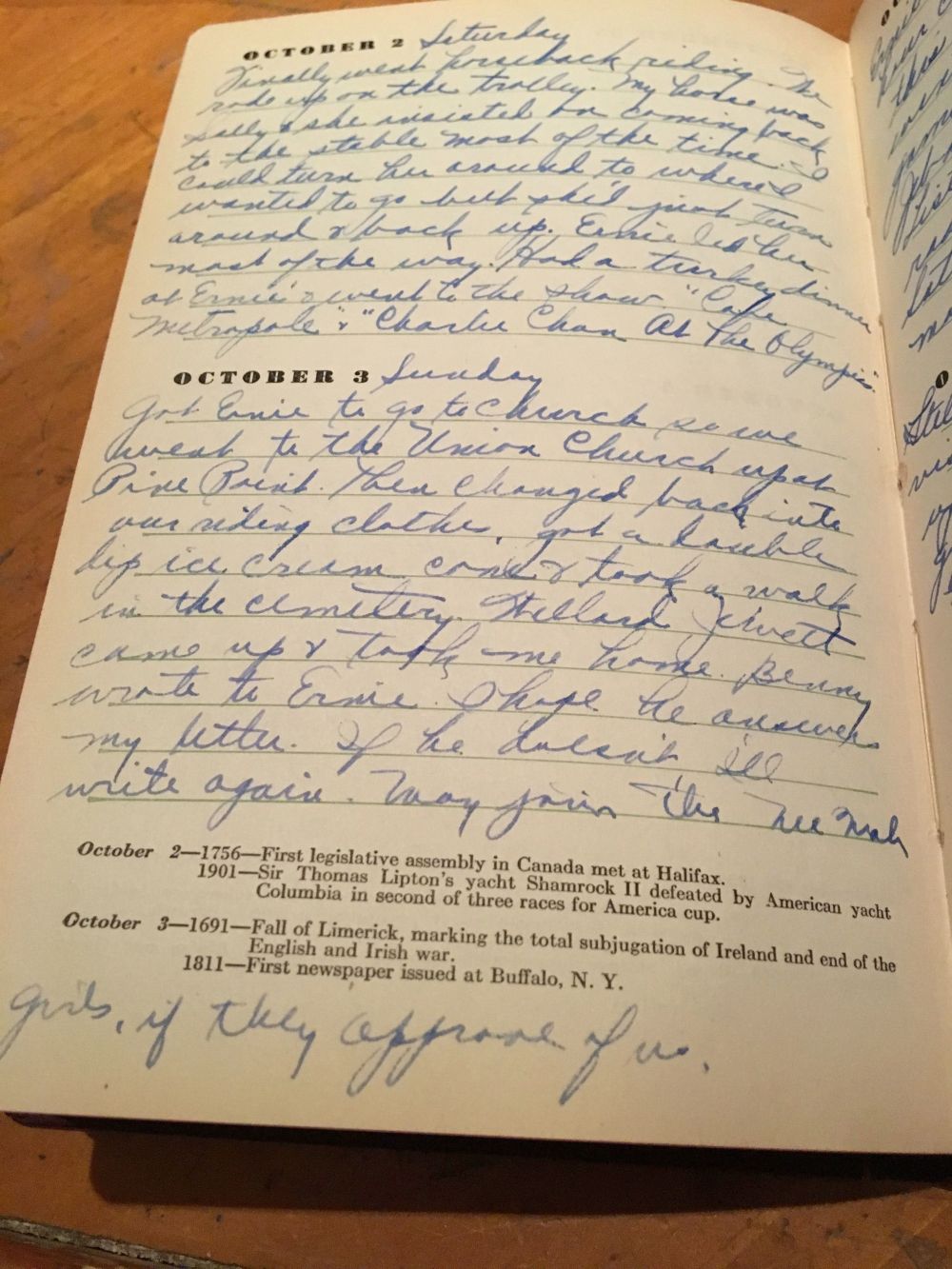 Got Ernie to go to church so we went to the Union Church up at Pine Point.  Then changed back into our riding clothes, got a double dip ice cream cone and took a walk in the cemetery.  Willard Jewett came up and took me home.  Benny wrote to Ernie.  I hope he answers my letter.  If he doesn’t I’ll write again.  May join the Nee Wah girls, if they approve of us.

I woke up this morning with a cigarette taste still.  We met Ethel for lunch.  Also saw Anna Fedorow.  She hasn’t heard from Frank in three weeks.  The Nee Wah girls accepted me as a member but didn’t comment upon Ernie.  Fear I’m not going to hear from Benny although he may be paying me back for not answering soon.

What a program we Nee Wah girls have ahead of us through Jan.  The formal is Jan. 22.  I’m on that committee and on the Thanksgiving one.  Ernie stayed over as usual.  We thought we might go to the social at the city hall but there was none.  No one out last night.

Here are the posts and images from that very formal she mentions here.  Follow the links 🙂

The Nee Wah club was even mentioned in yesterday’s post: