I would bet some of you will be able to relate.  I currently have 19 posts in various forms of no where near publish-ready hanging out at the top of my screen.  What a great mine for posts when looking for gold during the April A-Z Challenge.  This is a post I began a while ago continuing to tell the story, month by month, of the exciting tales in my grandmother’s diaries.  This post already had a title perfect for “B.”

Like any month in her diary, September is full of the people in Babu’s life, the meetings, the events, the hangouts and make outs.  As usual we see some ups and downs as far as Babu’s assessment of her love for Jake goes:

Ernie and I had lunch and she is staying with me tonight.  Our first Nee-Wah meeting was held tonight and I was selected vice president.  Jakey didn’t meet us after the meeting.  I guess he didn’t know.  Anyway we didn’t miss him much.  I guess I’m feeling out of love.

We know that is completely not true, but that does not stop September from being a rocky month for love.  Maybe, in fact, that’s what makes it worse.

Edmund, Fila, Jake and I all vowed we’d go to 11:00 mass this morning but Jakey was the only one to show up.  The 4 of us and another boy shot a repeater riffle in my back yard in the afternoon.  Nellie and I made supper for Ed, Jake, Caz and ourselves.  Fila came and last’s night 4 went fourth again-just for a ride.  Fila gave me a compact, a souvenir from war maneuver.  Jake and I spent the rest of the evening by the radio.  Everything was fine till we said goodnight.

I will never know what was said that made the parting a bad one.  Regardless, something is causing all to not be right in the land of love.

I know I showed you these pictures from this month already in this post:

but I can’t help showing them again. 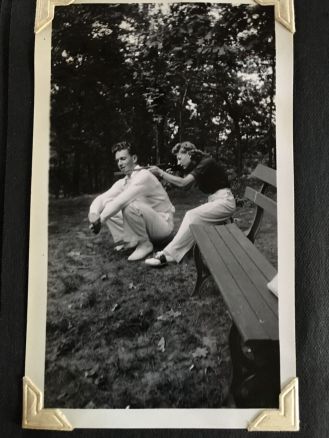 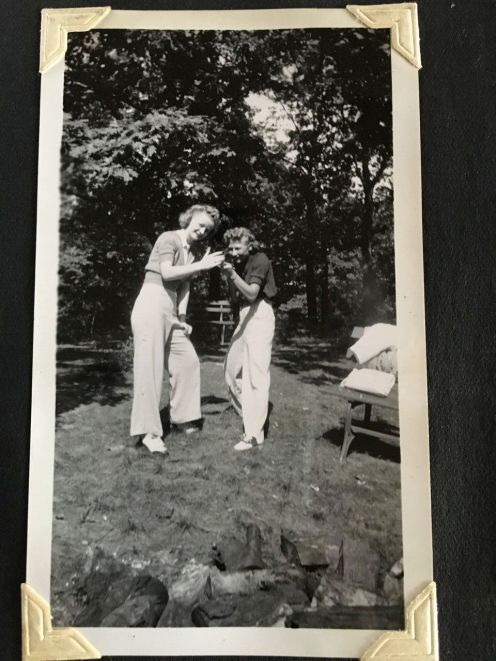 Despite that I am focusing on the bad times, they are also clearly in love and in the moment in September.  According to her, she had a “perfect” time going to look at a farm with Jakey, Fila and Gladys and then there is this lovely day:

Peaches tried to talk Ernie and me out of going to Nee-Wah meeting, but we went, and we made so many plans there, my head is swimming.  Ernie drove Jake’s car around and then we sat on the front porch, in the moonlight, eating fruit and telling jokes.  Jake told me he wakes up during the night looking for me and his mom says he hugs somebody so much, he tears the bed clothes.

And then there is this night and the next day with it’s consequences:

Ernie and I went riding at the Waronook Riding School in Westfield this afternoon.  Just as we got started, it started to rain and by the time we returned it was pouring.  We got soaked.  I got all dressed up tonight and it is now 10 o’clock and my supposed boyfriend hasn’t shown up.  So I’m undressing, washing, and going to bed.  Wonder what tomorrow will bring.

Didn’t fall asleep till one last night.  Nellie, Caz, Jake and I played tennis and then had a picnic at Mt. Tom.  Jake knew I was peeved but he offered no explanation.  He tried all the time to be pleasant but I treated him politely and that’s all.  I know he suffered.  Walked me home and wouldn’t let me go to bed.  We sat on the back hall steps for an hour and a half but I couldn’t weaken, much as I wanted to.  Finally at good-night he tried to kiss me and I turned my lips away.  He said good-bye and sort of slammed the door.  I didn’t fall asleep until almost three.

Nobody puts Baby in the corner and nobody stands up Babu!

Working and talking, I didn’t feel badly about the “rift” but tonight, at home, I had to grit my teeth to hold back tears.Went to choir rehearsal.Met Nellie on the way and told her to ask Jake about the card party tomorrow.Eddie Rumanowski joined the choir tonight.Nellie said Jake went down to Civil Service school.Spike and Joe Chmiel brought me home and we had a gay time talking.

Peach called me at the office and said he would pick me up after the card party.I was so glad to hear his voice, I couldn’t talk.I got dressed tonight and Edmund came.Jake had sent him to take me down.At the same time, Frank Adamczyk and Johnny Lech came to drive me down, too.I went with Ed and we picked up Jake and Chester Modzchecoski at American International College.We all went to the card party and Ernie played with us.I asked Jake not to play the victrola there so I rushed out and walked for a couple of miles down Main Street.Ernie turned back and she found them still at the “Y.”They didn’t know we’d left.By that time I was so sick with fear an apprehension, I felt like fainting.Jake found me and we came home, took the car and went to the airport.Talked Sat. night over.They didn’t get home till six in the morning.Fila got sick.The worst part about everything in that Jake is doing everything in his power to get in the flying field.That means he will have to go away.

Oh my, it hurts my heart to read about how upset she was.  She was always a person who kept her emotions in pretty good check, so this was a major blow up.  On the surface, it seems as though she got so upset about a victrola being played, or maybe simply about the fact that she was stood up a few nights before.  But I can see it was about so much more than that.  It was about Jake joining the military and leaving.  This explains to me why she was so happy to hear his voice and then so mad at him at the party.  When you know someone will be leaving, do you pull them closer or push them away?  I think most people end up doing both.  I understand it.

Jake is still running around seeing people and doctors about getting in for flying.  Edmund dropped in tonight and we went riding for about 3 hours.  When we got home, we met Jake.  He had been taking physical exams.  I hate to see him go away.  I don’t know what I’ll do.

I don’t know what you will do either Babu, but I know you’ll make it through.

Here is last Year’s April A-Z for B: