February, March and April, these are the days.  Love isn’t really heating up or cooling off, it’s nice and steady.  Wonderful!  The roller coster of love has turned to the lazy river for a moment.  And it’s so romantic.  So, maybe more like one of those Ventian boats a guy in a striped shirt pushes for you.  There is no talk of the building world war, at least not in the pages of these months.  She’s working, she’s playing, and she is turning 22!

Spring is in the air and Ernie and I felt silly so we acted silly.  Mother thought we had gone out of our minds with our fooling and such.  Meeting tonight was rather pleasant.  Billy and Jakey met us after and we rode and we rode around in the terra plane.  Finally drove into the garage and spent an hour or so in the car in the garage, talking.

She is almost 22 and still acting like a young girl.  You know what, she is still that way.  She talks to the birds on her place mat and dances when I dance around the kitchen.  This is the only way to live.

Were you wondering what a terraplane was?  Me, too!  It immediately conjured images of a crop duster plane in my mind.  This is what I found instead:

The Terraplane was a car brand and model built by the Hudson Motor Car Company of Detroit, Michigan, between 1932 and 1938. In its maiden year, the car was branded as the Essex-Terraplane; in 1934 the car became simply the Terraplane. They were inexpensive, yet powerful vehicles that were used in both town and country, as both cars and trucks bore the Terraplane name.

So just take a moment and imagine Babu and Jake driving around in THAT car!  ❤

The census taker came today but Mama and Dad said he didn’t ask too many questions.  Peaches and I went to confession and then Edmund and Filo came along to the “Forward Springfield” exhibit.  It was interesting but attended by far too many people.  Jakey couldn’t resist the airport so we drove in for a few thrilling moments.

The census taker comment is very interesting to me.  Why would they mention that he didn’t ask too many questions.  Intersting.  And here we have “Jakey and Emily kissing in a Terraplane!”  (Just kidding, I’m not sure that the Terraplane was Jakey’s car or Billy’s.)  Well, the way I figure it, going to confession that day earns you a bit of airport time.

Jakey and Billy called tonight and out on the front porch he said: “Gosh you look pretty.”  Unusual for him to say so.  We planned to shower parties for two of our Nee-Wah girls.  The boys met us after the meeting.  We stayed in the garage again.  Jakey was so tender and affectionate but that gets dangerous.  Habits are hard to break, I know, from experience.  So late again to bed.

The romance between them can’t be beat!  Just like Babu’s habit of staying up and out late nearly every night.  How does she do it?!

It rained all day.  Billy, Jake, and I visited Ernie to “waste and evening” as Billy says.  We played ping pong in her cellar.  Used one paddle on a side in doubles and laughed ourselves silly.  About 11:30 it started to snow and came thick and fast.  It was hard to see the road through the snowy windshield.

I shared this excerpt in this post because A) I just find it so entertaining to try to imagine what one paddle to two players would look like (there is that silly youthful girl again!) and 2) I may have found an image to go with it. 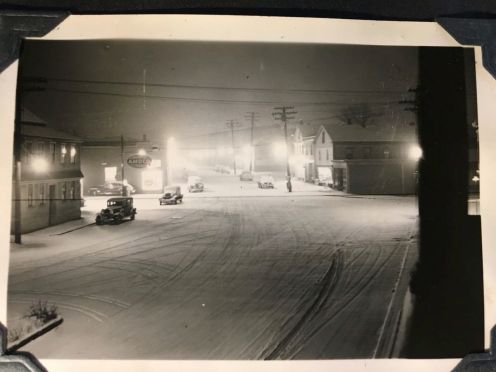 Man, if I were driving in that I’d want a heavy car like the Terraplane!  Why am I obsessed with the Terraplane?  I just love it.  It’s a land plane!

Now that I’ve started I can’t seem to get to write in here the night I should.  This afternoon Zosh and I visited Jeanette and Teddy and the baby.  It is a beautiful baby and worth everything one goes through.  Billy, Jake, and I saw “Brother Pat and Baby” and “Death of a Champion”.  Spent the rest of the evening in the parlor.  Peaches says I have nice legs and someday he’s going to own 50%.

Tonight Jakey and I just drove around together.  Brought his bridesmaid the pictures finally.  Ate popcorn and drank pop.  Ended up as usual at the airport.  The weather has turned cold again.  We had quite a long and intimate talk.  He said sometimes he feels as if I were the only one in the world he’d give anything up for and sometimes he doesn’t feel anything.

This is the start of something…not good.

Got to the Kiwani’s show late.  It hadn’t started yet but there were only last row seats so I stood with Edward Zimba while Sylvia Zimba played, etc.  Left and went to Parochial School and got there for the dance.  Danced most of the numbers and even Ernie Depathy came over.  He also walked me home.  Paid me pretty compliments as usual.  Said he wasn’t good enough for me and that he has started off the first chapter and I was to finish it.  We talked about marriage and love until I didn’t know what I thought.

Yesterday’s conversation with Ernie had me thinking all day.  I wondered why Jakey hadn’t stopped in to the dance last night and found out tonight that he had come but after he looked in he changed his mind but wouldn’t tell me why.  He and the bowling team are having their banquet tonight.  He almost didn’t go cause he wondered what was bothering me and said it wouldn’t take him long to get into my mind.

I guess by the middle of April the lazy river has gotten a little turbulent.  I have a feeling it’s only going to get more difficult down stream.