So, the other day, I believe this was actually as far back as last Tuesday, I really wanted to get back to the meat of this blog.  The transcribing and retelling of Babu’s life.  I took a gander at the last month’s worth of transcriptions – June 1939 – and I realized something was wrong.  Yup, there it was.  I mixed in a June passage from 1938 into 1939.

This means I’m messing up the order of my files and pictures and it took me quite a while to recoup and get everything organized again.  Well, mostly, no, only somewhat, organized.  It is the blessing and the curse of this project that there is just so much.  (And, what I don’t like to think about, no one knows how much time.)

Well, I took the time and I figured it all out.  I have the correct pages for July, 1939 and I will share them here with you!

She spends a lot of time with Jakey and falls further in love.

Even still, she goes on a date with Benny – yes!  he is back – and she kisses him.  (To me, the values and norms of dating just seem so different.  It happens all the time now but it would be considered cheating, wouldn’t it?  I guess if you don’t officially call it “going steady,” then it’s fair game?)

She also goes on a glorious New England vacation – with Jakey – that I am simply jealous of.  They go to Vermont then up to Maine for a couple of days and then back to Vermont.  They visit Old Orchard Beach and drive around an awful lot.  It may seem like nothing to hear me describe it but, when written in her pages, it seemed just wonderful!

As it turns out, my limited supply of time is not that limited, so I’ll leave you with a few passages which will fill out the story for me.

Monday, July 3rd, 1939
Ernie and I left work a little early and it was 5:45 when Jakey and we started for Vermont. Riding was good and we got there before nine. Jeb came around 11. We were supposed to go out but he had a mood on and we finally went to Bellows falls around 1:00. Got back and stayed in front of the house until 4:30. Jakey told me he thinks he loves me.

Awww!  But as a side note, there always seems to be something going on with Jeb.  I don’t think Babu likes him for Ernie much.

Wednesday, July 19th, 1939
Our vacation plans have all gone awry. It seems there was a forest fire and Jeb can’t take time off his weekend. Jakey and I, however, are driving to Grafton tomorrow. What we are going to do later, we don’t know. Mom and Dad said they trust me a great deal and to be careful and be good.

What a sweet moment between Babu and her parents!  But there is Jeb again, being a downer.

Thursday, July 20th, 1939
At 1:00 Jakey and I started off. We proceeded along leisurely, (in fact it took us till 7 to get to Grafton.) We rode up some mountain and spent a hour there with Jakey playing the harmonica. We ate supper at the Chimes. Went over to church for Jeb and the four of us rode around and also parked under the stars in Chester’s Lovers’ Lane.

All right.  You can’t not love a guy who sits on a mountain playing his harmonica for you!  But still, this is all she gives him: 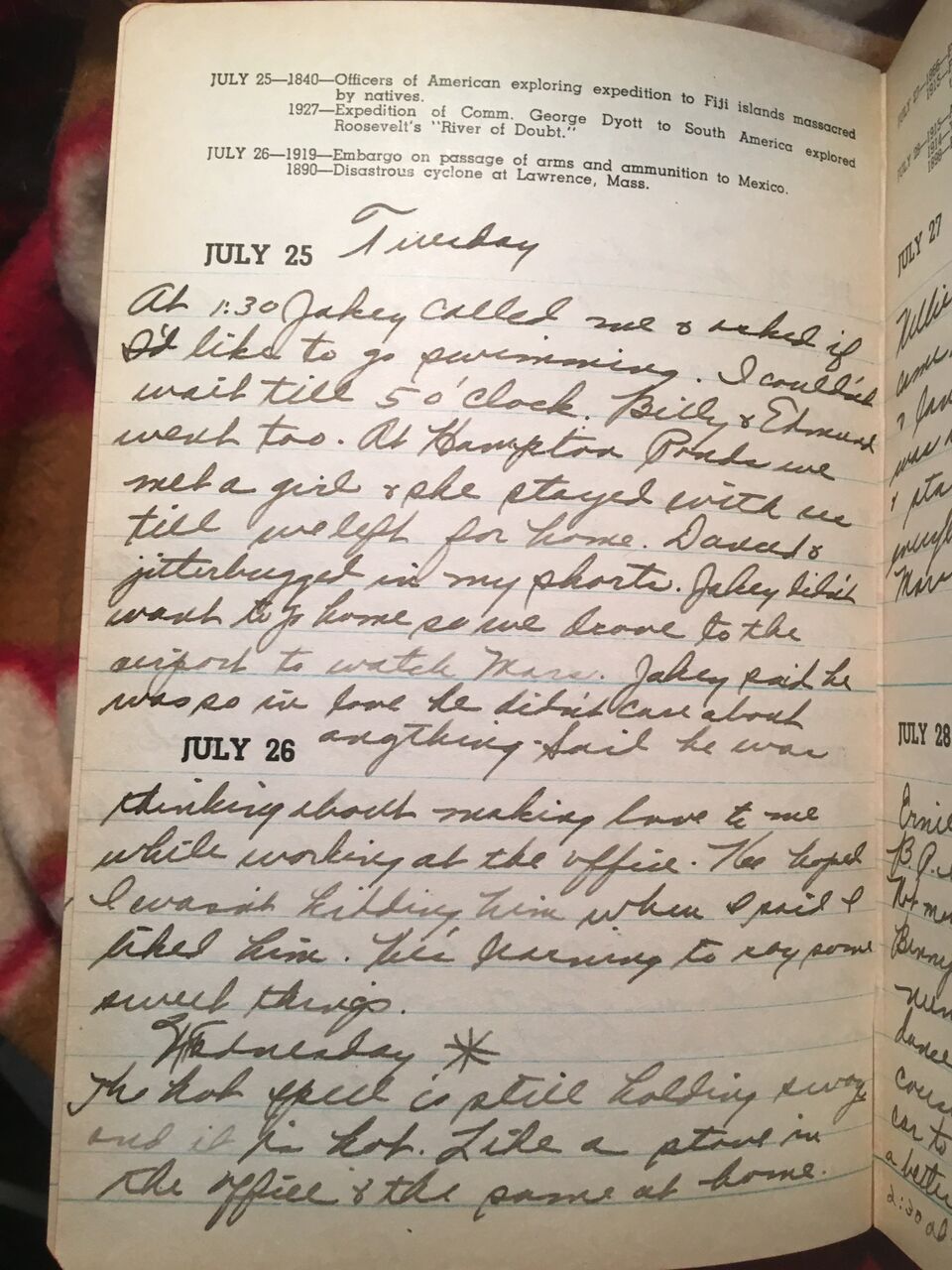 Tuesday, July 25th, 1939
At 1:30 Jakey called me and asked if I’d like to go swimming. I couldn’t wait till 5 o’clock. Billy and Edmund went too. At Hampton Ponds we met a girl and she stayed with us til we left for home. Danced and jitterbugged in my shorts. Jakey didn’t want to go home so we drove to the airport to watch Mars. Jakey said he was so in love he didn’t care about anything. Said he was thinking about making love to me while working at the office. He hoped I wasn’t kidding him when I said I liked him. He’s learning to say some sweet things.

Wow!  After such a racy conversation, all she can give him is that she likes him?!?!  (But remember, I don’t think this is as racy as it seems.  “Making love” means kissing, so far.)  I think her diary passages belie her, even though she still can’t admit it to him.  Did you notice something in the image of this passage?  It’s happened several times this month.  She goes out with Jakey and writes about their adventures and conversations well into the next day’s allotted segment.  There’s barely enough room the next day to complain about the heat!

It’s a thrill to get the chance to read about such a pivotal time in her life.