There is a sweet spot, a perfect place I like to be with my writing.  There is also the wet cement place.  The place of nothing but frustration and obligation.

Where am I right now?  Smack in the middle of the two.

My paradise as a writer is new creation.  Writing the outline.  Talking to people in trepidatious excitement about the new project.  It’s the kind of trepidation of being in a new relationship.  Do you spill?  What if it doesn’t work out?  Will people understand?  How do you even explain it?

I have begun a new project.  A play.  I dare not even yet speak my hopes and dreams for it yet.  All I do care about it that is gets written.

Then there is the terrible but necessary place.  The place where it feels like work.  The artistic equivalent of waiting in line at the RMV.  Or full stop traffic on a sweltering day in a car with broken AC. Yea, that.

I bet this is different for every writer.  For me it’s the editing. Pretty much for the last year since I quit teaching I have been revising, editing, and trying to make my short novel a little longer.  A year.  A year of that.  Ugh.

Then came writing queries.  I started with research and I’m not ashamed to say the first thing I read was The Complete Idiots Guide to Getting Published.  Then I read countless articles and blogs.

One of the best pieces of advice I’ve been given, at least I think it is, time will tell, is to send out queries for agents in batches of 10.  Less than ten, it will take several lifetimes.  Send too many at once and you almost always can’t query them again for the same project.  The point is to learn what you might improve for the next ten to better your chances.

Then I filtered through and chose my ten agents.  I tried to find ones that wanted what I have.  And what do I have?  I don’t really know.  (An agent’s dream, right?!)  So I did my best to fake it.

Then I wrote the base query, again, after a lot of research on the dos and don’ts.  Then I researched each agent:  What clients have they taken on?  What do they want to look at?  How do they want their queries written?

Then I personalized each query and wrote it how they wanted it written.  All that research, ten different queries, a year of revising and editing.  The last few days before I sent those out I was pre-tee cranky.

But a week ago, I hit the send button, ten times, and began to wait.  Three rejections have come in and I’m thrilled.  I know any writing is going to get rejected a million times. With these three rejections, I’m that much closer.  When I get all ten in I can get back to query work and do it again.  As many times as it takes.

Worst case?  My novel never gets published.  I will write more and I will try to get those published as well.  If you think about it, I should hope my next novels are better than this one.  (Can you image if Harper Lee’s Go Set a Watchman was published before Mockingbird?  I never would have read the latter!)  Nothing will stop me from writing the next and putting myself through the same heart break.

I’m in between the heaven and hell places for writers.  I’ve had a sputtery start on my new project yet I’ll need soon enough to get back to looking up new agents and query writing.  Maybe even a revision or more editing will be necessary before that point.

Working currently on a dramatic script might be ill advised.  Not that one single person advised me to, quite the opposite.  What is on nearly ever agent’s list of “does not want?”  Dramatic scripts.

I don’t care!  I’m writing the first draft, the rough one.  I’m in the creating stage.  So that door is shut.  This one will not be written with publication in mind.  Those aren’t the future plans I wont voice yet any way.  But I’ll shut those out too when I shut this door and get back to writing. 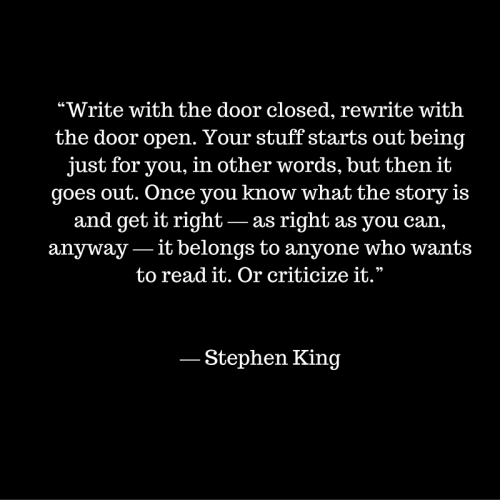