Wednesday, September 16th, 1936
Robert Taylor alias Louis Bottigi winked at me today in advertising.  Said hello to the boy Ames who drove the car when we went to the prom.  Saw Teddy and Jeanette on their porch.  They looked very alive, modern, and rather happy I should say.  She was in slacks and a sports shirt with knees drawn up.  He walked about restlessly and watched her.  She flirted.  Yet?

Wednesday, September 30th, 1936
Johnny broke his glasses yesterday and I broke one of mine tonight.  Zosh came up feeling exceptionally gay.  She hugged mother and started on me.  In the hug my glasses cracked and one part came off.  Maurice has a dark green shirt.  He talked to a girl this noontime.  I don’t care.  Mr. Brendel has a cold and because he can’t speak, gives us written tests in all his classes.

Saturday, October 3rd, 1936
Wore my glasses for lessons for the first time.  Forgot all about asking Professor for a new schedule.  Zosh + I have been returning the three dollars she gave for the glasses she broke back and forth.  They’re with me now.  Johnny Krol came up tonight.  The last time she was up she told me when a boy kisses a girl he suffers.  He has certain glands.  He can’t control himself.  I didn’t know that.

Thursday, October 22nd, 1936
What an inspiration Katherine Hepburn is!  Saw her tonight in “Mary of Scotland”_ “Two Fisted Gentlemen.”  Coming home and at home I would be a good specimen of movie crazy.  Making believe I’m an actress.  But I don’t believe it’s movie crazy.  I love the feeling after a movie like that.  Sometimes I’m afraid it’ll come up and choke me.  Saw Willy + Jimmy.  Haven’t done my homework.

Lovely lost in the moment.

Friday, October 30th, 1936
Like my coat pretty well now since it has come from the tailors.  This noon Ernie and I played ping pong and then tossed the basketball around.  Split my blouse while doing it and Joseph Kirchner, who sits in back of me in accounting class, said how could he concentrate with such things going on.  Went to the library.  Met Eddie Kowal who is still playing a man of leisure.  A beautifully dark blue night, but cold. 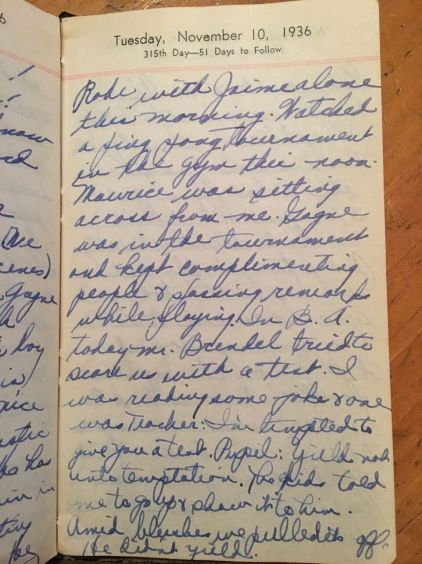 Tuesday, November 10th, 1936
Rode with Jamie alone this morning.  Watched a ping pong tournament in the gym this noon.  Maurice was sitting across from me.  Gagne was in the tournament and kept complimenting people and passing remarks while playing.  In B.A. Today Mr. Brendel tried to scare us with a test.  I was reading some jokes and one was Teacher:  I’m supposed to give you a test.  Pupil:  Yeild not unto temptation.  The kids told me to go up and show it to him.  Amid blushes we pulled it off.  He didn’t yield. 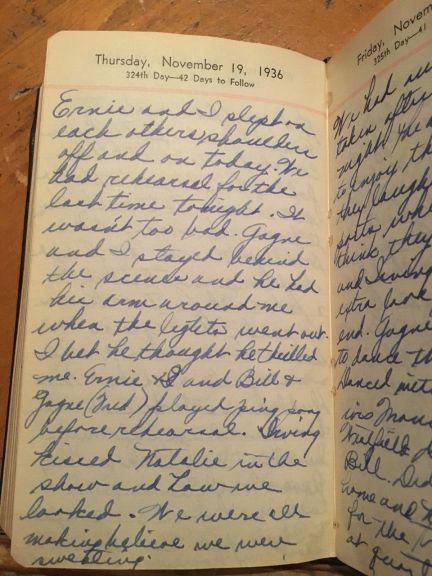 Thursday, November 19th, 1936
Ernie and I slept on each other’s shoulders off and on today.  We had rehearsal for the last time tonight.  It wasn’t too bad.  Gagne and I stayed behind the scenes and he had his arm around me when the lights went out.  I bet he thought he thrilled me.  Ernie + I and Bill and Gagne (Fred) played ping pong before rehearsal.  Irving kissed Natalie in the show and how we looked.  We were all making believe we were sweating. 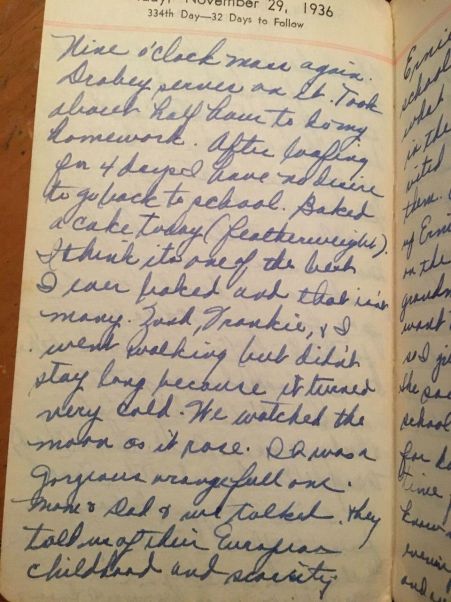 Sunday, November 29th, 1936
Nine o’clock mass again.  Drobey serves on it.  Took about half an hour to do my homework.  After loafing for four days I have no desire to go back to school.  Baked a cake today.  (Featherweight.)  I think it’s one of the best I ever baked and that is many.  Zosh, Frankie, and I went walking but didn’t stay long because it turned very cold.  We watched the moon as it rose.  It was a gorgeous orange full one.  Mom and Dad and we talked.  They told us of their European childhood and scarcity.