The Falcons is a group in support of Polish Americans with a focus on maintaining a healthy life through exercise.  Apparently they also have meets and compete against other groups and in June, 1934, Babu has been enlisted to compete in Basketball.  She’s a mess:

Wednesday, June 20th, 1934
Aggie told me today that I was in for basketball at the meet Saturday.  Honest, I’m scared cold. We all depend on Flash. She won first place last year, so that she will have some chance. Chester is with the 12 to 14 class.  And we are quite sure she’ll get something. I hope Aras feels up to it and shows as good a showing as last year. When I think of last year, I  could kick myself just where I should have been kicked. Some fun.

Thursday, June 21st, 1934
When I think of Saturday, I feel quite frightened. I do want to go and I hope and pray that I shall make at least a good showing. I shouldn’t mind so much if I didn’t win but I imagine coming home with a dejected look and people patting me and saying “better luck next time.” Perhaps I couldn’t take it. But if we all could see in the future there would be no surprise. It is best as it is. Knowing everything one would get narrow-minded and never be excited.

Friday, June 22nd, 1934
Jeanette’s sty is awfully big today, so that she won’t go tomorrow. Just my luck. Imagine going alone. Oh boy. I don’t feel like going at all. All in all, I’m kind of scared. Will have lots of competition and that’s bad. I’ll try my very best and hope it will amount to at least a little. The weather man says showers. I do hope he is wrong. Jeanette is a dear. She wished me luck and that alone makes me feel so much better. I hope her sty will go away for Sunday. 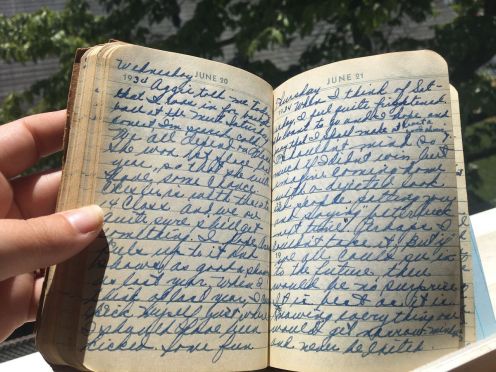 After three days of living in fear, the very day came:

Saturday, June 23rd, 1934
Instead of waking to look upon a world of sunshine, I faced the dreariest days ever. Naturally, I thought we wouldn’t go to Northampton, but Penny called, so I went.  When Aggie told me I was going to run, I nearly fell over, but run I had to.  I came in second in the heat but last in the finals! But my one ambition came along and I won to second place in basketball throw. All night long I’ve been keeping those metals.  It turned out to be a perfect day.

This is a victory!  Ahh, but there is a twist:

Monday, June 25th, 1934
I say “this is my lucky day.”  Every time I brag something goes wrong. First the good thing was that I made my appointment for a permanent for Friday. That is good, but as we were coming home we met Chester, and she spread the good news. I’m going to get third prize. That is what they think. I get what I won or nothing. Something tells me I will.  It will be nothing. That’s going to be just too bad because I know the way out, although I’d like to stay.

It manages to all be put into perspective with this:

Tuesday, June 26th, 1934
After all was said and done, I got third prize. Still it’s all right, and if I still belong perhaps someday I may get something more.

Wednesday, June 27th, 1934
That metal of mine is on a chain around my neck. I keep it hidden because people might get the idea that I am showing off. I do like it lots.

I love nothing more than imagining her wearing that medal under her sports blouse.  It meant a lot.